The SonyStation that could have been

I have quite a history with Sun and Java starting with my time at ANL. During the end of my time at ANL as I was looking to start a companyor join a startup related to Java technologies I managed to hook up with a couple of very creative folks in California. One of them had worked on interactive television technologies at GTE and the other had worked at web development houses such as Atomix. Together we decided to form a virtual company and because of the contacts of one of the team we got a private invite, along with several other teams, to present to Sony a proposal for how we would develop the Jeopardy license for on-line play. We broke up duties with myself taking on the task of the programming of the game engine while others looked at the assets for the game, the management and day to day interactions, and we all colloborated on the overall experience.

The overall concept was pretty huge but given the tight deadline for a demo, we were last to join the invitee list, we decided to focus strictly on the gameplay aspects. To give you some background though: The concept had users connecting to a virtual "green room". Here you could basically choose your gameplay avatar, "mingle" in groups that you could group chat with, select these groups (of up to 3 players) to initiate a game of Jeopardy with. Points would be collected and prizes, etc... could be won.

Okay... How was gameplay to be handled. At the time I decided that the best way to play against other players on the internet would be to download a Java applet to the users computer and they would communicate with a centralized game server for their questions. I chose this route as JavaScript and browser based DOM support wasn't really effective at the time and the only other real alternative was to do it server based, which was just yuck! So Java it was. Now since the goal of Jeopardy was to allow folks to play for real prizes we needed to overcome two significant hurdles. How do you allow people to play on all manner of connections and second, which came about because of the way the design of the game had it playing, how do you hide the questions and answers on the wire so that folks couldn't cheat.

Realize that at this time I had never heard of network Doom or anything else that was related to network game play. Stupid I guess but that was just where I was at in life. The answer to the first question had me write some code that essentially had constant communications with the server which calculated average "ping" times for messages that went back and forth. The game played by showing the user a question, a timer counted up a period of time to allow all users to read the question and then a countdown during which a user could click (or press a number key) on an answer to select it as their choice. Because some users would be on T1 lines and others on 28K or 56K modems we needed to allow for one connection to have sent the questions and timers started while the others were still downloading. All timing was driven by time after the countdown started with the average ping time used as a "slop" indicator. The other issue was in preventing folks from intercepting the question and answer on the wire and programmatically having a bot play. Since we had low end PCs and I didn't have a cryptography background then we delayed sending the answers until the very last second. Terrible in hindsight but for a while it would have worked as we had many many questions that we could alternate through before a bot could learn then all and their many different answers. It's harder to discuss than to implement and it worked really, really well for this scenario.

Here's a screen shot of the game we delivered at the first screen. Control of the board, shown by the yellow outline, was shown to each player and would move around during gameplay. The screenshot below is from a single user game, in multi-user mode it would show the name of every player. 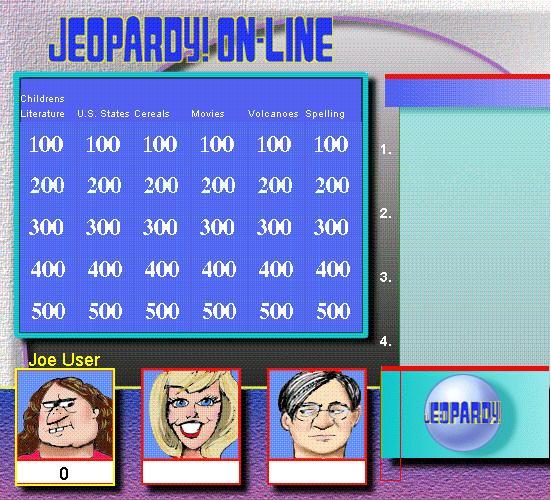 This screenshot shows the board after selecting one of the squares above. This shows the countdown (green to yellow to red) under way. While the question is meant to be read the bar grows "up" while colored red. Then shifts to green and counts down. 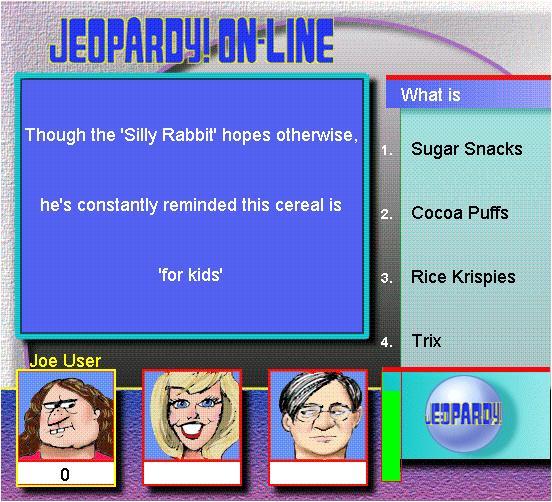 We even included the concept of daily doubles. Other users would simply see a screen showing they were locked out of the competition at the time and then play would resume. All users would get to see the correct answer at the end of each round as it would be colored a dark blue. 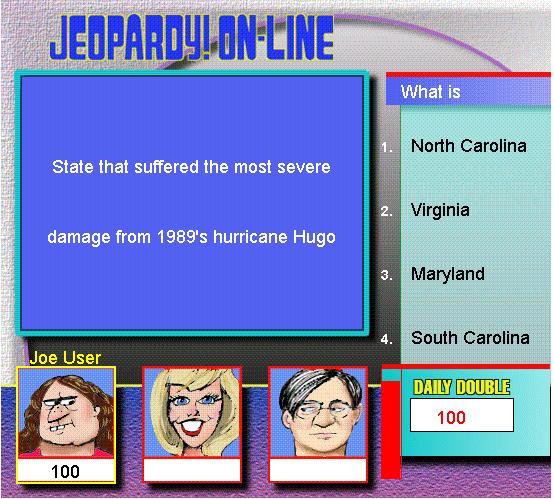 We were able to present this information in a formal presentation to the folks in charge of SonyStation at Sony. In fact I was able to play against the VP at Sony from my house over my modem. Since I developed the application I knew the proper questions and answers and so I was sandbagging a bit to let the VP win. I quickly found out he was very very good and I would need to actually work a bit to show him how the multi-user feature worked! :-D

In the end, in keeping with the gestalt of this entire blog, we lost out. Supposedly we made the cut to the final two or three companies but the official explaination was that because we weren't a real compnay but only a virtual one they couldn't select us. We told them select us and we'll become real but they did not bite. I waited to see what would ultimately launch and lets just say that more than 6-9 months later they launched a version of Jeopardy that I thought was simply horrid. A server based version that didn't allow real interaction thouh it did grade you based on number of right/wrong answers. It didn't have the green room concept either. *Sigh*

Edit: I've actually still got the applet and server code to make this work and it runs in a current environment but it requires too much manual intervention to accomplish the link-up to post a link. Sorry... :-(
Posted by MrJohnson at 10:06 PM