As I have mentioned earlier I got into Java early on in the life cycle. In fact the first Java Programming contest had an entry by myself and a co-worker at the time. This is the short version of that story for how we created this.

We had developed some pretty cool GIS applications (See DOOGIS for what they evolved to) in Java but given the type of work we were doing it wasn't deemed appropriate to release those as essentially open source if we submitted them to Sun for this contest. Though we knew about the contest for a long time we decided not to enter it. Then, with just two days before the contest closed (at midnight), we decided on something cool to try. Interactive books on PCs were just becoming the rage (or I was finally paying attention because of my own child) and I thought what a great concept to make this playable over the Internet.

The basic concept was to create a book that had pages. On the page you had a background image with images and actions that overlayed the background as well as enter/exit actions. From this basic concept we could put hot-spots on the page that would play audio, display an image or cause an animation (along a path) to take place. The groundwork was layed. We could have a words highlight and play the word sound, have a character animate along a path, have an obect that was there and after animation disappeared. We had stuff for kids to try and click on and keep them amused.

Now that the basic design was in hand it was time to get started with coding. I layed out an object structure that I thought made sense and along with my partner in crime, Bob, we set forth getting the assets we would need for the book. This included scanning images for the background, cutting images out of those to animate and recording audio that would accompany the book. Everything was going great except for the coding bit. By the end of the first day with only one day left I felt the class structure in place was way too complicated to ever get anything reasonable onscreen, never mind done, by the next day. I was disgusted. I quit. My friend encouraged me that he as sure we could get this done in the 24 hours we had left. I was unsure and went home to sleep on it. I woke up the next day completely rejuvenated! I think I can get this done and besides I didn't want to let my friend down.

Got in early and started coding. The assets were coming along but we didn't have anywhere near enough. We decided to cut the books short and simply demonstrate the concept across several pages rather than a whole book. Only the first two pages would have a "complete" set of capabilities though stuff existed on all pages for the judges to have some fun with (Monty Python and Homer anyone?) Time ticked away and progress was being made but it was going to be really close. Check the contest rules again. Doesn't have to be in until midnight Pacific time! Fantastic! We can make this then. We got everything up and running about 1/2 hour before the deadline and then fought with the submission process up until a couple minutes before it was due and, after an email exchange with some Sun folks, finally got it to work. 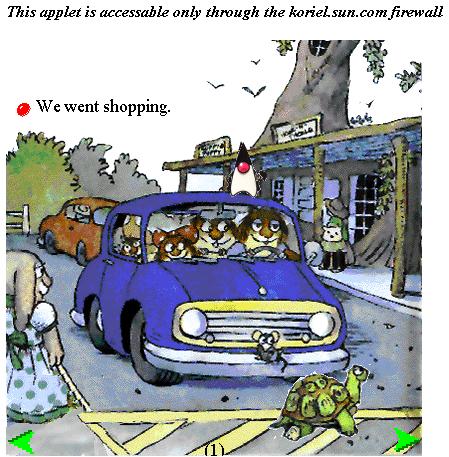 Here's a screenshot of one of the pages:

On this page we have three animated images. The turtle, Duke, and a bird. The bird and duke follow a "complex" path that is defined as taking some period of time to traverse. A single animation thread handles the movement of all the objects and positions them accordingly. The bird is a "one-shot" item that moves and then is not to be seen again until the page is reloaded. You can click on the words to highlight them and have them read back to you. The page enter action takes care of reading the entire sentence(s) upon landing on the page.

We were delighted to have simply finsihed something that we thought targeted a unique audience and could translate into a real business opportunity for Java. Finallly the results were announced: Honorable Mention! Cool! It took us 24 hours to design and code and we won an honorable mention! Not bad for a days work. It was awesome to be recognized but looking back at it now I feel that had the judges included the target audience, kids, we might have done even better.

Sadly this never evolved into anything bigger (though it does provide grist for the mill). After hunting around a bit I found the class files and lo and behold I tried them in a modern browser with the latest Java plug-in and they still work.
Posted by MrJohnson at 6:04 PM